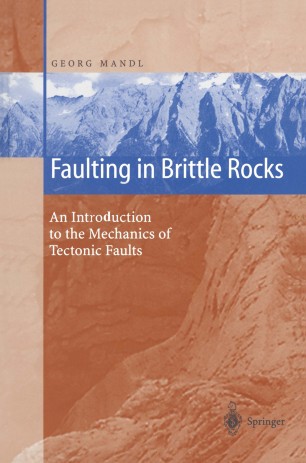 An Introduction to the Mechanics of Tectonic Faults

The book presents an introduction to the mechanical genesis of tectonic faults in the brittle crust of the Earth. In the first chapters mechanical concepts of rock (such as brittleness, stresses in a discontinuum, effective stress, buoyancy, poro-thermo-elasticiy, fracture modes and the corresponding failure and slip conditions) are discussed. The book focuses on the critical re-assessment of Coulomb-Mohr's theory of sliding deformation in rocks, and explores the wide range of fault structures that can be analysed by this theory. Strong emphasis is laid on the effects of pore pressure changes. Phenomena, such as the growth, spacing, and reactivation of faults, the distribution of fault slip, and the formation of certain shear joints, which lie outside the scope of Coulomb-Mohr's simple theory, are tackled by different theoretical, numerical and experimental methods. The book concludes with a discourse on similarity and self-similarity of fault structures and a critical examination of the feasibility of scaled model experiments. Mathematical formalism is restricted to a minimum and is replaced, wherever possible, by the extremely useful graphic method of Mohr's stress circle which is introduced in a separate chapter. The book includes illustrative geological and geotechnical examples.