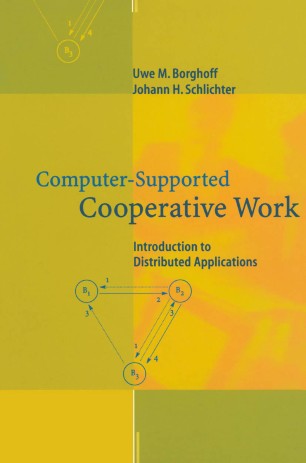 The terms groupware and CSCW (computer-supported cooperative work) have received significant attention in computer science and related disciplines for quite some time now. This book is a revised and extended version of the 2nd edition of the German textbook "Rechnergestützte Gruppenarbeit: Eine Einführung in verteilte Anwendungen". It has two main objectives: first, to outline the meaning of both terms, and second, to point out both the numer­ ous opportunities for users of groupware and the risks of applying such sys­ tems. The book intends to introduce an area of distributed systems, namely the computer support of individuals trying to solve a common problem in cooperation with each other but not necessarily having identical work pi aces or working times. Computer-supported cooperative work is an interdisciplinary application domain. It can be viewed as a synergism between the areas of distributed sys­ tems and (multimedia-) communication on the one hand and between those of information science and socio-organizational theory on the other hand. Thus, the book is meant to help students of aH these disciplines, as weH as users and developers of systems which have communication and cooperation within groups as top priorities.