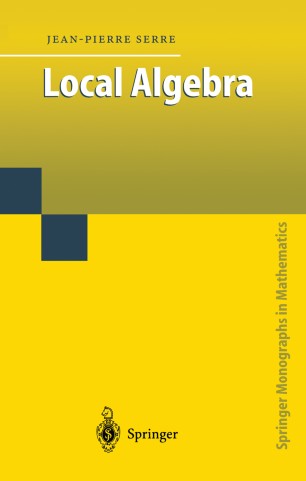 The present book is an English translation of Algebre Locale - Multiplicites published by Springer-Verlag as no. 11 of the Lecture Notes series. The original text was based on a set of lectures, given at the College de France in 1957-1958, and written up by Pierre Gabriel. Its aim was to give a short account of Commutative Algebra, with emphasis on the following topics: a) Modules (as opposed to Rings, which were thought to be the only subject of Commutative Algebra, before the emergence of sheaf theory in the 1950s); b) H omological methods, a la Cartan-Eilenberg; c) Intersection multiplicities, viewed as Euler-Poincare characteristics. The English translation, done with great care by Chee Whye Chin, differs from the original in the following aspects: - The terminology has been brought up to date (e.g. "cohomological dimension" has been replaced by the now customary "depth"). I have rewritten a few proofs and clarified (or so I hope) a few more. - A section on graded algebras has been added (App. III to Chap. IV). - New references have been given, especially to other books on Commu- tive Algebra: Bourbaki (whose Chap. X has now appeared, after a 40-year wait) , Eisenbud, Matsumura, Roberts, .... I hope that these changes will make the text easier to read, without changing its informal "Lecture Notes" character.