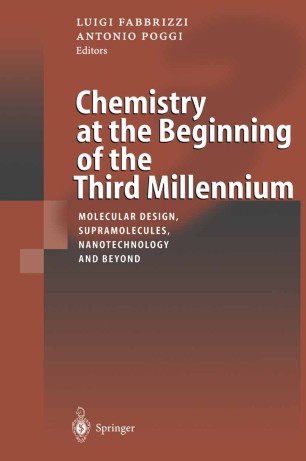 Chemistry at the Beginning of the Third Millennium

This Volume is based on the Lectures presented at the Meeting "Chemistry at the Beginning of the Third Millennium", wh ich was held in Pavia, Italy, during the period 7-10 October, 1999. The Meeting involved the participation of scientists from German and ltalian Universities of the 'Coimbra Group'. The 'Coimbra Group', wh ich was founded in 1987, gathers the most ancient and prestigious European Universities, with the aim to promote initiatives in both research and teaching and to provide guidelines for the progress and development of the University system. German and Italian Universities within the Coimbra Group propose every year a theme for scientific discussion, which originates a Meeting to be held in a German or Italian University. The Meeting in Pavia was the fifth of the series and followed those of Bologna (1995), Jena (1996), Siena (1997), Heidelberg (1998). Each Meeting is centred on a topic from either humanistic or natural sciences and consists in aseries of lectures presented by distinguished scientists from the six participanting Universities. For the Pavia Meeting, the Steering Committee chose Chemistry as the topic and gathered researchers with experience in almost all fields of chemistry. In particular, during the Meeting, lectures were presented on many up-to-date subjects of chemistry, including: materials science, superconductors, supramolecular chemistry, bioinorganic chemistry, fullerenes, liquid crystals, photoinduced electron transfer, etc. The different topics were covered by distinguished and renown researchers of the various fields.