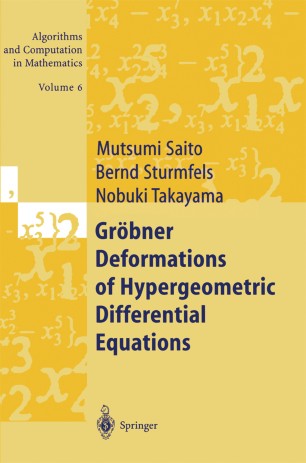 Part of the Algorithms and Computation in Mathematics book series (AACIM, volume 6)

In recent years, new algorithms for dealing with rings of differential operators have been discovered and implemented. A main tool is the theory of Gröbner bases, which is reexamined here from the point of view of geometric deformations. Perturbation techniques have a long tradition in analysis; Gröbner deformations of left ideals in the Weyl algebra are the algebraic analogue to classical perturbation techniques. The algorithmic methods introduced in this book are particularly useful for studying the systems of multidimensional hypergeometric partial differentiel equations introduced by Gel'fand, Kapranov and Zelevinsky. The Gröbner deformation of these GKZ hypergeometric systems reduces problems concerning hypergeometric functions to questions about commutative monomial ideals, and thus leads to an unexpected interplay between analysis and combinatorics. This book contains a number of original research results on holonomic systems and hypergeometric functions, and it raises many open problems for future research in this rapidly growing area of computational mathematics '