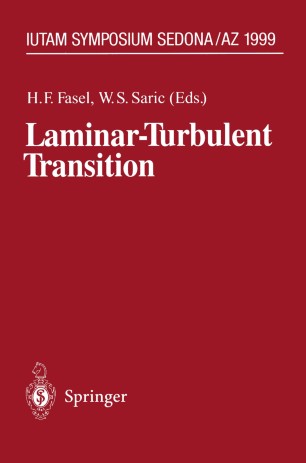 The origins of turbulent flow and the transition from laminar to turbulent flow are among the most important unsolved problems of fluid mechanics and aerodynamics. Besides being a fundamental question of fluid mechanics, there are any number of applications for information regarding transition location and the details of the subsequent turbulent flow. The JUT AM Symposium on Laminar-Turbulent Transition, co-hosted by Arizona State University and the University of Arizona, was held in Sedona, Arizona. Although four previous JUT AM Symposia bear the same appellation (Stuttgart 1979, Novosibirsk 1984, Toulouse 1989, and Sendai 1994) the topics that were emphasized at each were different and reflect the evolving nature of our understanding of the transition process. The major contributions of Stuttgart 1979 centered on nonlinear behavior and later stages of transition in two-dimensional boundary layers. Stability of closed systems was also included with Taylor vortices in different geometries. The topics of Novosibirsk 1984 shifted to resonant wave interactions and secondary instabilities in boundary layers. Pipe- and channel-flow transition were discussed as model problems for the boundary layer. Investigations of free shear layers were presented and a heavy dose of supersonic papers appeared for the first time. The character of Toulouse 1989 was also different in that 3-D boundary layers, numerical simulations, streamwise vortices, and foundation papers on receptivity were presented. Sendai 1994 saw a number of papers on swept wings and 3-D boundary layers. Numerical simulations attacked a broader range of problems.