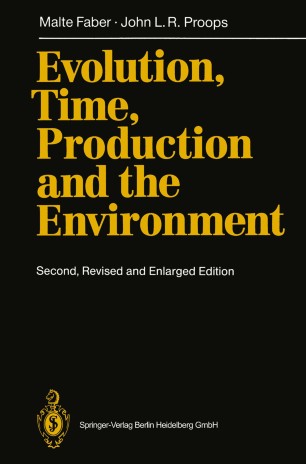 Evolution, Time, Production and the Environment

This second edition is brought about by two factors. First, the initial printing sold out much more rapidly than we expected. Second, several colleagues have been kind enough to suggest that this book not only has a contribution to make to ecological economics, but also has relevance to economics general. Thus our OUf distinction distinction between between genotypic genotypic and phenotypic evolution may be used to characterise not only economic sectors, but also whole economies, and in particular economic schools of thought. For instance, the Austrian subjectivist school deals explicitly with ignorance and the emergence of novelty, and may therefore be used to analyse genotypic development. In contrast, neoclassical economics deals principally with phenotypic development. When Dr. Müller Muller of Springer-Verlag suggested the production of a second edition, we were therefore pleased that this book might remain available. Several readers and in particular reviewers of the first edition remarked, in one way or the other, that they had questions concerning several of our OUf concepts, concepts, such as genotype, phenotype, ignorance, surprise, sUlprise, novelty, novelty, knowledge, knowledge, predictable predictable and unpredictable processes etc. Of course, all these concepts are of importance for evolution in general and for invention and innovation of new techniques in particular. We therefore considered some modifications and extensions of the original text, but on the advice of colleagues, have restricted oUfselves ourselves to correcting mistakes that crept into the first edition and to two extensions ofthe of the text, text, one major, one smaller.