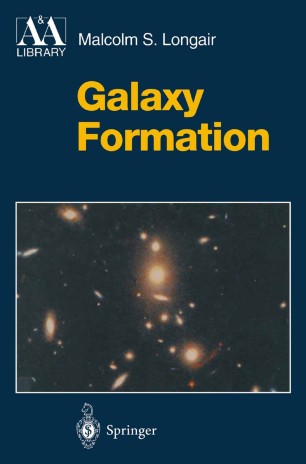 For Deborah, Mark and Sarah 'Not another book on cosmology!', I hear the reader exclaim. 'Surely there are quite enough books on cosmology to satisfy everyone's needs?' I was asked by Springer-Verlag to expand into a full-length book the set of lecture notes that I prepared in 1988 for the First Astrophysics School organised by the European Astrophysics Doctoral Network. The set of notes was entitled Galaxy Formation and was published as a chapter of the vol­ ume Evolution of Galaxies: Astronomical Observations (eds. 1. Appenzeller, H. J. Habing and P. Lena, pages 1 to 93, Springer-Verlag Berlin, Heidelberg, 1989). In that chapter, I attempted to bridge the gap between elementary cosmology and the technical papers appearing in the literature, which can seem quite daunting on first encounter. The objective was to present the physical concepts and key results as clearly as possible as an introduction and guide to the technical literature. The revision of these lecture notes into a full-length book was delayed by other projects. Specifically, I am completing a three-volume work for Cam­ bridge University Press, entitled High Energy Astrophysics, (Volume 1, 1992; Volume 2, 1994; Volume 3, Cambridge University Press, Cambridge 1998). In addition, a further series of lecture notes on The Physics of Background Radiation was prepared for the 1993 23rd Advanced Course of the Swiss So­ ciety of Astrophysics and Astronomy, the topic of which was The Deep Uni­ verse (A. R. Sandage, R. G. Kron and M. S.