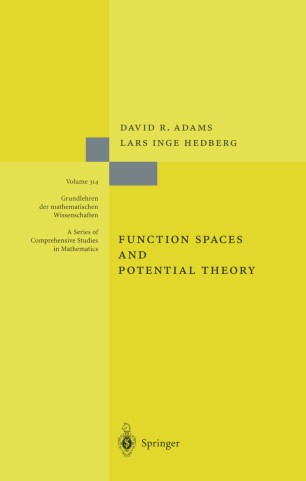 Function spaces, especially those spaces that have become known as Sobolev spaces, and their natural extensions, are now a central concept in analysis. In particular, they play a decisive role in the modem theory of partial differential equations (PDE). Potential theory, which grew out of the theory of the electrostatic or gravita­ tional potential, the Laplace equation, the Dirichlet problem, etc. , had a fundamen­ tal role in the development of functional analysis and the theory of Hilbert space. Later, potential theory was strongly influenced by functional analysis. More re­ cently, ideas from potential theory have enriched the theory of those more general function spaces that appear naturally in the study of nonlinear partial differential equations. This book is motivated by the latter development. The connection between potential theory and the theory of Hilbert spaces can be traced back to C. F. Gauss [181], who proved (with modem rigor supplied almost a century later by O. Frostman [158]) the existence of equilibrium potentials by minimizing a quadratic integral, the energy. This theme is pervasive in the work of such mathematicians as D. Hilbert, Ch. -J. de La Vallee Poussin, M. Riesz, O. Frostman, A. Beurling, and the connection was made particularly clear in the work of H. Cartan [97] in the 1940's. In the thesis of J. Deny [119], and in the subsequent work of J. Deny and J. L.