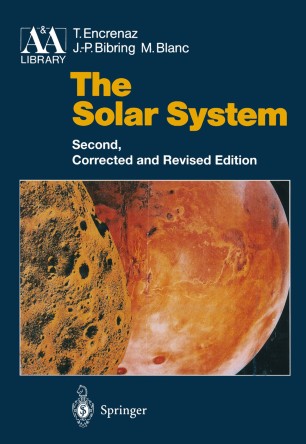 Since the first edition of this book appeared in 1990, planetology has seen a number of fascinating discoveries that have increased our knowledge of the Solar System. These have come from both ground- and space-based observa­ tional programmes. Although some space probe missions have ended in fail­ ure, even they have added to our store of information about the planetary environment. The Galileo probe, despite being crippled by its incompletely deployed main antenna, has already achieved some spectacular results. For the first time we have obtained pictures of asteriods, with the images that Galileo returned of Gaspra, Ida, and the latter's satellite, Dactyl. The main objective, the drop­ ping of an instrumented capsule into Jupiter's atomosphere, and prolonged in-situ investigation of the planet, will take place at the end of 1995. Saturn's turn will come early in the next century with the Cassini mission (to be launched in 1997), which will study the planet for an extended period and attempt to land the Huygens probe on the surface of Titan. NASA's Magellan mission proved to be a great success, with its highly detailed radar mapping of the surface, and atmospheric studies. The exploration of Mars was less fortunate with the failure of both spaceprobes of the Soviet Phobos mission, as well as NASA's Mars Observer probe. Despite this set­ back, plans are in hand for future, collaborative exploration of the planet, using both surface stations (possibly active rovers), surface penetrators and balloon probes, as well as orbiters.