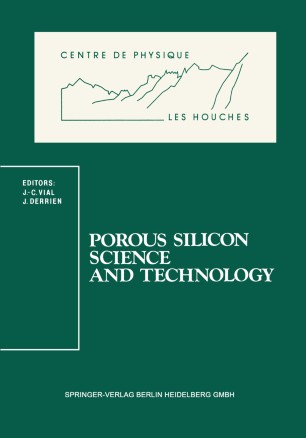 The discovery of bright visible light emission from porous silicon has opened the door to various nanometer sized silicon structures where the confinement of carriers gives rise to interesting physical properties. While the high efficiency of the light emission in the visible range is the common and the most prominent feature, their structures display similar properties with other highly divided materials (even non semiconductors), and then justify a multidisciplinary approach. This along with potential applications has attracted a large number of researchers followed by students to be trained. Until now international conferences have provided the exchange of information but have remained highly specialised so it was time to give thought to the organisation of topical and advanced lectures where the multidisciplinarity and the didactic approach are paramount. L'ecole des Houches was ideally devoted to that purpose. The meeting : " Luminescence of porous silicon and silicon nanostructures" was the first international school on this topic but some aspects in the organisation and the attendance have given an international workshop flavor to it. The school by itself has trained 82 «students», most of them were students starting their Ph. D thesis. 50% were French citizens and the other represented countries were Germany, England, USA, Czechoslovakia, The Netherlands, Italy, Japan, Poland, Spain, Canada, Brazil, India and Russia.