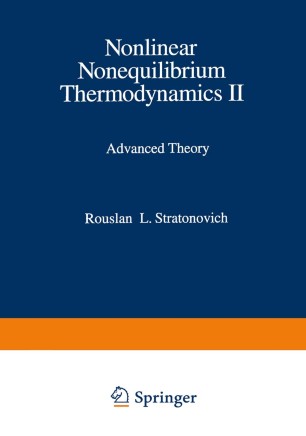 This two-volume work gives the first detailed coherent treatment of a relatively young branch of statistical physics - nonlinear nonequilibrium and fluctuational­ dissipative thermodynamics. This area of research has taken shape rather recently: its de~elopment began in 1959. The earlier theory - linear nonequilibrium ther­ modynamics - is in principle a simple special case of the new theory. Despite the fact that the title of the book includes the word 'nonlinear', it also covers the results of linear nonequilibrium thermodynamics. The presentation of the linear and nonlinear theories is done within a common theoretical framework that is not subject to the linearity condition. The author hopes that the reader will perceive the intrinsic unjty of this dis­ cipline, the uniformity and generality of its constituent parts. This theory has a wide variety of applications in various domains of physics and physical chemistry, enabling one to calculate thermal fluctuations in various nonlinear systems. The book is divided into two volumes. Fluctuation-dissipation theorems (or relations) of various types (linear, quadratic and cubic, classical and quantum) are considered in the first volume. There one encounters the Markov and non-Markov fluctuation-dissipation theorems (FDTs), theorems of the first, second and third kinds. Nonlinear FDTs are less known than their linear counterparts. The present second volume of the book deals with the advanced theory. It consists of four chapters. The connection and interdependence of the material in the various chapters of both volumes are illustrated in the accompanying diagram.