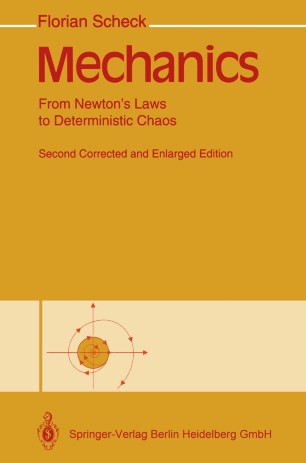 From Newton’s Laws to Deterministic Chaos

Purpose and Emphasis. Mechanics not only is the oldest branch of physics but was and still is the basis for all of theoretical physics. Quantum mechanics can hardly be understood, perhaps cannot even be formulated, without a good knowledge of general mechanics. Field theories such as electrodynamics borrow their formal framework and many of their building principles from mechanics. In short, throughout the many modem developments of physics where one fre­ quently turns back to the principles of c1assical mechanics its model character is feIt. For this reason it is not surprising that the presentation of mechanics reflects to some extent the development of modem physics and that today this c1assical branch of theoretical physics is taught rather differently than at the time of Arnold Sommerfeld, in the 1920s, or even in the 1950s, when more emphasis was put on the theory and the applications of partial-differential equations. Today, symme­ tries and invariance principles, the structure ofthespace-time continuum, and the geometrical structure of mechanics play an important role. The beginner should realize that mechanics is not primarily the art of describing block-and-tackles, coIIisions of billiard balls, constrained motions of the cylinder in a washing ma­ chine, or bicycle riding.