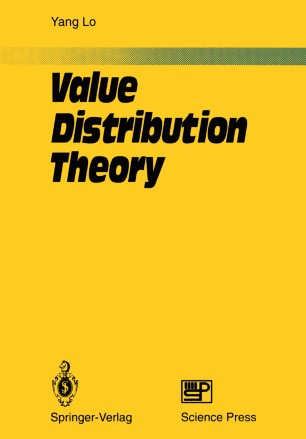 It is well known that solving certain theoretical or practical problems often depends on exploring the behavior of the roots of an equation such as (1) J(z) = a, where J(z) is an entire or meromorphic function and a is a complex value. It is especially important to investigate the number n(r, J = a) of the roots of (1) and their distribution in a disk Izl ~ r, each root being counted with its multiplicity. It was the research on such topics that raised the curtain on the theory of value distribution of entire or meromorphic functions. In the last century, the famous mathematician E. Picard obtained the pathbreaking result: Any non-constant entire function J(z) must take every finite complex value infinitely many times, with at most one excep­ tion. Later, E. Borel, by introducing the concept of the order of an entire function, gave the above result a more precise formulation as follows. An entire function J (z) of order A( 0 < A < (0) satisfies -1' logn(r, J = a) \ 1m = 1\ r->oo logr for every finite complex value a, with at most one exception. This result, generally known as the Picard-Borel theorem, lay the foundation for the theory of value distribution and since then has been the source of many research papers on this subject.