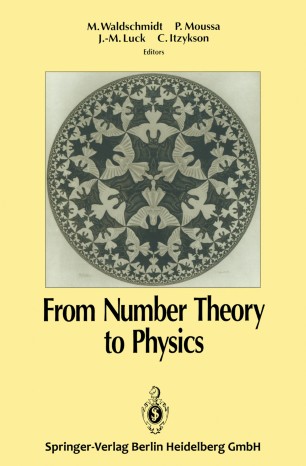 From Number Theory to Physics

The present book contains fourteen expository contributions on various topics connected to Number Theory, or Arithmetics, and its relationships to Theoreti­ cal Physics. The first part is mathematically oriented; it deals mostly with ellip­ tic curves, modular forms, zeta functions, Galois theory, Riemann surfaces, and p-adic analysis. The second part reports on matters with more direct physical interest, such as periodic and quasiperiodic lattices, or classical and quantum dynamical systems. The contribution of each author represents a short self-contained course on a specific subject. With very few prerequisites, the reader is offered a didactic exposition, which follows the author's original viewpoints, and often incorpo­ rates the most recent developments. As we shall explain below, there are strong relationships between the different chapters, even though every single contri­ bution can be read independently of the others. This volume originates in a meeting entitled Number Theory and Physics, which took place at the Centre de Physique, Les Houches (Haute-Savoie, France), on March 7 - 16, 1989. The aim of this interdisciplinary meeting was to gather physicists and mathematicians, and to give to members of both com­ munities the opportunity of exchanging ideas, and to benefit from each other's specific knowledge, in the area of Number Theory, and of its applications to the physical sciences. Physicists have been given, mostly through the program of lectures, an exposition of some of the basic methods and results of Num­ ber Theory which are the most actively used in their branch.