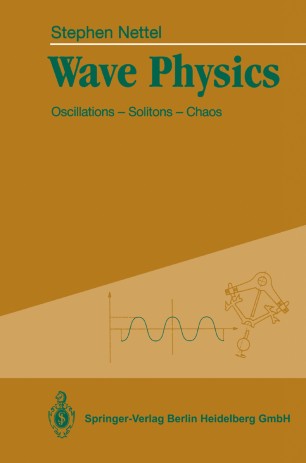 This is a text for the third semester of undergraduate physics for students in accel­ erated programs who typicaHy are preparing for advanced degrees in science or engineering. The third semester is often the only opportunity for physics depart­ ments to present to those of these students who are not physics majors a coherent background in the physics of waves required later for confident handling of applied problems, especially applications based on quantum mechanics. Physics is an integrated subject. It is often found that the going gets easier as one goes deeper, learning the mathematical connections tying together the vari­ ous phenomena. Even so, the steps that took us from classical wave physics to Heisenberg's "Physical Principles of Quantum Theory" were, as a matter of his­ tory, harder to take than later steps dealing with detailed applications. With these considerations in mind, the classical physics of oscillations and waves is devel­ oped here at a more advanced mathematical level than is customary in second year courses. This is done to explain the classical phenomena, but also to provide background for the introductory wave mechanics, leading to a logical integration of the latter subject into the presentation. The concluding chapters on nonlinear waves, solitons, and chaos broaden the previously established concepts of wave behavior, while introducing the reader to important topics in current wave physics.