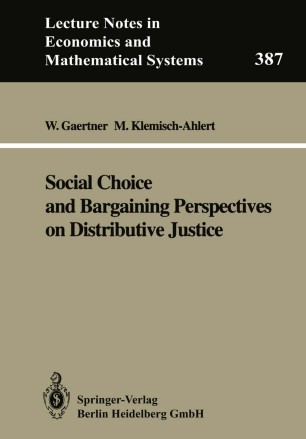 It is probably fair to say that there does not exist a unique and generally accepted not ion of justice. Even if one confines oneself to economic justice one can still get many answers to the question of how justice - henceforth we shall use the term "distributive justice" ­ should be defined and characterized. This may be disappointing for the outside observer but one can also view this as achallenge, at least as long as one thinks that distributive justice is an issue economics should be concerned with. Many problems of distributive justice can be described as follows: There is a fixed collection of well-defined objects (usually commodi­ ties) which are quantitatively measurable and perfectly divisible. This collection is to be divided up among a certain number of individuals, the members of society, let 's say. According to which principles or rules should this distribution be carried out? Should people be rewarded according to their ability or according to their needs? Should the distribution be such that nobody envies the bundle of any other member of society? Should the collection of entities be distributed in a way that yields the greatest benefi.