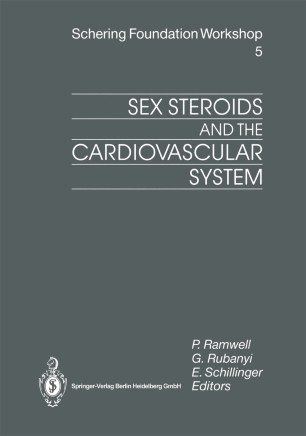 Sex Steroids and the Cardiovascular System

Evidence accumulated over the past decade show that gonadal steroid hormones participate in an important way in the physiological and pa­ thophysiological regulation of the cardiovascular system. The hor­ monal profile appears to put males at a disadvantage biologically in terms of cardiovascular diseases. The incidence of hypertension is higher in men than in pre-monopausal women indicating an influence of gender on the hypertensive disease process. Males and females have equivalent cholesterol levels until puberty but males suffer an ex­ ponential increase in heart disease in their forties, while the female rise does not start until a decade later, after menopause. Animal and human studies provided ample evidence, that estrogens lower the levels of low density lipoproteins and keep high density lipoproteins elevated. These changes may be advantageous in the prevention of heart diesease. Co­ ronary artery atherosclerosis has been shown to be more pronounced in ovarectomized female monkeys as in intact females. Androgen, con­ versely, lowers the high density lipoproteins and elevates low density lipoproteins. Regarding blood pressure, it is well established that hypertension is more severe or develops more rapidly in male than fe­ male rats in several genetic forms of hypertension, and that gonadal steroid hormones are probably playing an important role in explaining this observation. Risk factors of human hypertension and coronary heart dies ease include menopause and ovarectomy.