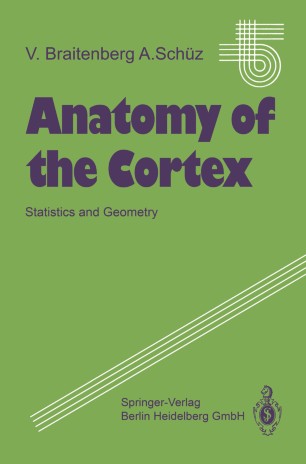 Anatomy of the Cortex

In this essay we propose a view of the cerebral cortex from an unusual angle, determined by our search for the most general statements on the relation between cortical structure and function. Our results may be at variance with the ideas of those physiologists who have specialized subsystems of the cortex in mind, but are not in contrast with them, as we hope to show. Our view is akin to one presented by Moshe Abeles in his monograph Local Cortical Circuits ( 1982). It is related to the theory developed by Gunther Palm, for many years our partner, in Neural Assemblies (1982). It owes much to the ideas which inspire the work of George Gerstein (beginning with the classic: Gerstein 1962) and especially to the insights gained by our colleague Ad Aertsen and his group in TUbingen. Our ideas on the cortex find some resonance in a recent trend in Artificial Intelligence (Kohonen 1977; Hopfield 1982; Rumelhart et al. 1986), and indeed the diagram (Braitenberg 1974a) representing the dominant idea of that trend, the associative matrix with feedback, has served as an emblem for the editorial enterprise Studies of Brain Function since its inception in 1977. Since our earlier reports (Braitenberg 1974a,b, 1977, 1978a,b, 1986; Schilz 1976, 1978, 198la,b, 1986) enough new experimental evidence has accumulated in our own laboratory (summarized by Schilz 1989) and elsewhere to justify a more extended and more confident presen­ tation.