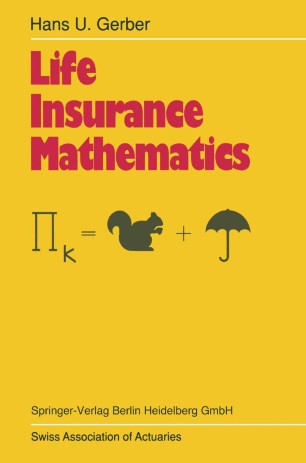 HaIley's Comet has been prominently displayed in many newspapers during the last few months. For the first time in 76 years it appeared this winter, clearly visible against the nocturnal sky. This is an appropriate occasion to point out the fact that Sir Edmund Halley also constructed the world's first life table in 1693, thus creating the scientific foundation of life insurance. Halley's life table and its successors were viewed as deterministic laws, i. e. the number of deaths in any given group and year was considered to be a weIl defined number that could be calculated by means of a life table. However, in reality this number is random. Thus any mathematical treatment of life insurance will have to rely more and more on prob ability theory. By sponsoring this monograph the Swiss Association of Actuaries wishes to support the "modern" probabilistic view oflife contingencies. We are fortu­ nate that Professor Gerber, an internationally renowned expert, has assumed the task of writing the monograph. We thank the Springer-Verlag and hope that this monograph will be the first in a successful series of actuarial texts. Hans Bühlmann Zürich, March 1986 President Swiss Association of Actuaries Preface Two major developments have influenced the environment of actuarial math­ ematics. One is the arrival of powerful and affordable computers; the once important problem of numerical calculation has become almost trivial in many instances.