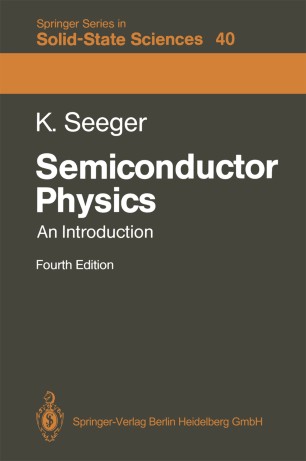 Televisions, telephones, watches, calculators, robots, airplanes and space vehicles all depend on silicon chips. Life as we know it would hardly be possible without semiconductor devices. An understanding of how these devices work requires a detailed knowledge of the physics of semiconductors, including charge transport and the emission and absorption of electromagnetic waves. This book may serve both as a university textbook and as a reference for research and microelectronics engineering. Each section of the book begins with a description of an experiment. The theory is then developed as far as necessary to understand the experimental results. Everyone with high-school mathematics should be able to follow the calculations. A band structure calculation for the diamond lattice is supplemented with a personal computer program. Semiconductor physics developed most rapidly in the two decades following the invention of the transistor, and naturally most of the references date from this time. But recent developments such as the Gunn effect, the acoustoelectric effect, superlattices, quantum well structures, and the integral and fractional quantum Hall effect are also discussed. The book has appeared in translation in Russian, Chinese and Japanese.