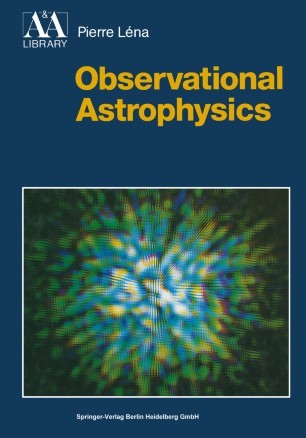 For the last twenty years astronomy has been developing dramatically. Until the nineteen-fifties, telescopes, spectrometers, and photographic plates consti­ tuted a relatively simple set of tools which had been refined to a high degree of perfection by the joint efforts of physicists and astronomers. Indeed these tools helped at the birth of modern astrophysics: the discovery of the expan­ sion of the Universe. Then came radioastronomy and the advent of electronics; the last thirty years have seen the application to astrophysics of a wealth of new experimental techniques, based on the most advanced fields of physics, and a constant interchange of ideas between physicists and astronomers. Last, but not least, modern computers have sharply reduced the burden of dealing with the information painfully extracted from the skies, whether from ever­ scarce photons, or from the gigantic data flows provided by satellites and large telescopes. The aim of this book is not to give an extensive overview of all the tech­ niques currently in use in astronomy, nor to provide detailed instructions for preparing or carrying out an astronomical project. Its purpose is methodologi­ cal: photons are still the main carriers of information between celestial sources and the observer. How we are to collect, sample, measure, and store this infor­ mation is the unifying theme of the book. Rather than the diversity of tech­ niques appropriate for each wavelength range, we emphasize the physical and mathematical bases which are common to all wavelength regimes.