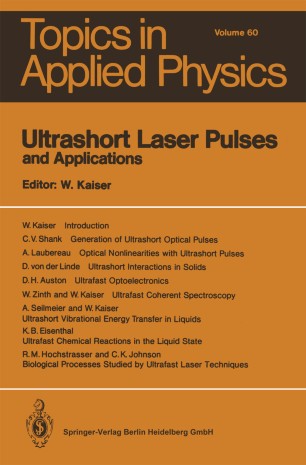 Ten years ago, Stanley L. Shapiro edited the book entitled Ultrashort Light Pulses (Topics Appl. Phys., Vol. 18), which was written by eight experts in the field. Six years later, Charles V. Shank added a bibliography (1980-1983) in the second edition with approximately one thousand new references. During the past decade the field has grown so rapidly that a completely new book had to be written. In particular, the reduction of the time scale of light pulses into the femtosecond range has opened up new experimental possibilities never even foreseen in the preceding literature. The vast literature with countless ideas and applications makes it impossible for a single person to write a comprehensive review. Nine scientists, actively working in the field since its beginning, have decided to join forces to prepare a new book describing the present state of the art. Emphasis is placed on the generation and numerous applications of ultrashort laser pulses. This book covers a wide area of science: physics, engineering, chemistry, and biology. The various chapters and sections are prepared in each case such that the reader is given a brief introduction to the specific subject. Ample references for a more detailed study are given at the end of each chapter.