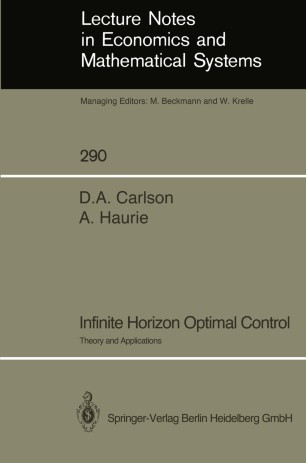 This monograph deals with various classes of deterministic continuous time optimal control problems wh ich are defined over unbounded time intervala. For these problems, the performance criterion is described by an improper integral and it is possible that, when evaluated at a given admissible element, this criterion is unbounded. To cope with this divergence new optimality concepts; referred to here as "overtaking", "weakly overtaking", "agreeable plans", etc. ; have been proposed. The motivation for studying these problems arisee primarily from the economic and biological aciences where models of this nature arise quite naturally since no natural bound can be placed on the time horizon when one considers the evolution of the state of a given economy or species. The reeponsibility for the introduction of this interesting class of problems rests with the economiste who first studied them in the modeling of capital accumulation processes. Perhaps the earliest of these was F. Ramsey who, in his seminal work on a theory of saving in 1928, considered a dynamic optimization model defined on an infinite time horizon. Briefly, this problem can be described as a "Lagrange problem with unbounded time interval". The advent of modern control theory, particularly the formulation of the famoue Maximum Principle of Pontryagin, has had a considerable impact on the treatment of these models as well as optimization theory in general.