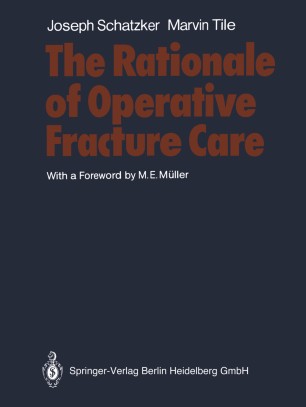 The Rationale of Operative Fracture Care

After the publication of the AO book Technique of Internal Fixation of Fractures (Miiller, Allgower and Willenegger, Springer-Verlag, 1965), the authors decided after considerable discussion amongst themselves and other members of the Swiss AO that the next edition would appear in three volumes. In 1969, the first volume was published (the English edition, Manual of Internal Fixation, appeared in 1970). This was a manual of surgical technique which discussed implants and instruments and in which the problems of internal fixation were presented schematically without radio­ logical illustrations. The second volume was to be a treatise on the biomechanical basis of internal fixation as elucidated by the work done in the laboratory for experi­ mental surgery in Davos. The third volume was planned as the culminating effort based upon the first two volumes, treating the problems of specific fractures and richly illustrated with clinical and radiological examples. It was also to discuss results of treatment, comparing the results obtained with the AO method with other methods. The second and third volumes were never published. The second edition of the AO Manual appeared in 1977. It dealt in greater detail with the problems discussed in the first edition, although it still lacked clinical exam­ ples and any discussion of indications for surgery. Like the first edition, it was trans­ lated into many languages and was well received. Finally, after 22 years, the much discussed and much needed third volume has appeared.