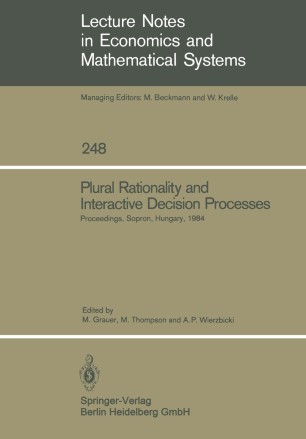 These Proceedings report the scientific results of the Summer Study on Plural Rationality and Interactive Decision Processes orga­ nized jointly by the System and Decision Sciences Program of the Inter­ national Institute for Applied Systems Analysis (located in Laxenburg, Austria) and the Hungarian Committee for Applied Systems Analysis. The Study, which was held in Sopron over the period 16-26 Augus·t 1984, had a very special character. Sixty-eight researchers from sixteen coun­ tr~es participated, most of them contributing papers or experiments. In addition many members of IIASA's Young Scientists Summer Program were present. All of these participants were heavily involved in dis­ cussions; discussions that were not limited to the allotted time but extended well into the evenings and nights. By design, the Study gathered specialists from many disciplines, from philosophy and cultur­ al anthropology, through decision theory, game theory and economics, to engineering and applied mathematics. A further element of diversity was the representation of several varieties of culture, from typically Western countries, through Middle and Eastern Europe, to the Far East.