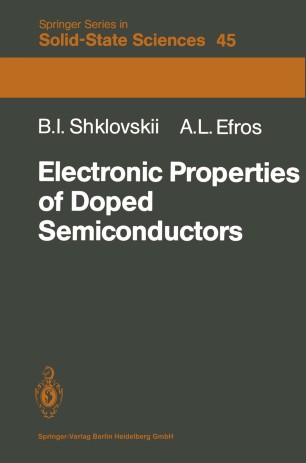 First-generation semiconductors could not be properly termed "doped- they were simply very impure. Uncontrolled impurities hindered the discovery of physical laws, baffling researchers and evoking pessimism and derision in advocates of the burgeoning "pure" physical disciplines. The eventual banish­ ment of the "dirt" heralded a new era in semiconductor physics, an era that had "purity" as its motto. It was this era that yielded the successes of the 1950s and brought about a new technology of "semiconductor electronics". Experiments with pure crystals provided a powerful stimulus to the develop­ ment of semiconductor theory. New methods and theories were developed and tested: the effective-mass method for complex bands, the theory of impurity states, and the theory of kinetic phenomena. These developments constitute what is now known as semiconductor phys­ ics. In the last fifteen years, however, there has been a noticeable shift towards impure semiconductors - a shift which came about because it is precisely the impurities that are essential to a number of major semiconductor devices. Technology needs impure semiconductors, which unlike the first-generation items, are termed "doped" rather than "impure" to indicate that the impurity levels can now be controlled to a certain extent.