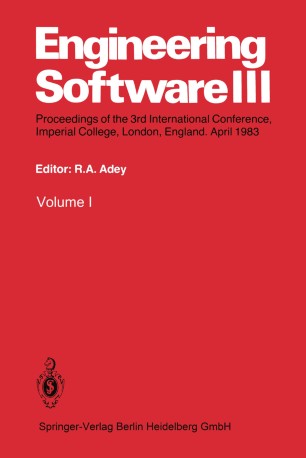 These proceedings contain the papers presented at the Third International Conference and Exhibition on Engineering Software held at Imperial College, London during the period April 11th - 13th, 1983. I must thank again the authors who submitted the large numbers of papers which made selection a difficult task. The theme of the conference is the use and application of computers in engineering. Many abbreviations have been invented to describe the use of computers from CAD, CAM, CADMAT etc. but the term which best describes the scope of the conference is Computer Aided Engineering, CAE. The papers have been split into sections covering different application areas such as Mechanical Engineering, Civil Engineering. Other sections cover techniques such as Finite Elements, Boundary Elements and General Simu lation. An important session at the conference was the new field of engineering databases and as in past conferences the special sessions were devoted to microcomputers. R.A. ADEY (EDITOR) ENGINEERING SOFTWARE DESIGN 3 MENU INPUT GENERATING SYSTEM FOR THE FORTRAN PROGRAMS I. Kovacic Institute of Structural and Earthquake Engineering Department of Civil Engineering University "Edvard Kardelj" of Ljubljana, Yugoslavia INTRODUCTION Although fortran Is losing competition with the new languages it Is still very used programming language, especially in the technical software production. Technical tasks are not to be described by a lot of data usually, as in business applications.