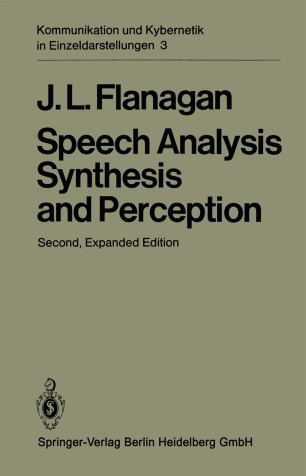 The first edition of this book has enjoyed a gratifying existence. 1s­ sued in 1965, it found its intended place as a research reference and as a graduate-Ievel text. Research laboratories and universities reported broad use. Published reviews-some twenty-five in number-were universally kind. Subsequently the book was translated and published in Russian (Svyaz; Moscow, 1968) and Spanish (Gredos, S.A.; Madrid, 1972). Copies of the first edition have been exhausted for several years, but demand for the material continues. At the behest of the publisher, and with the encouragement of numerous colleagues, a second edition was begun in 1970. The aim was to retain the original format, but to expand the content, especially in the areas of digital communications and com­ puter techniques for speech signal processing. As before, the intended audience is the graduate-Ievel engineer and physicist, but the psycho­ physicist, phonetician, speech scientist and linguist should find material of interest.