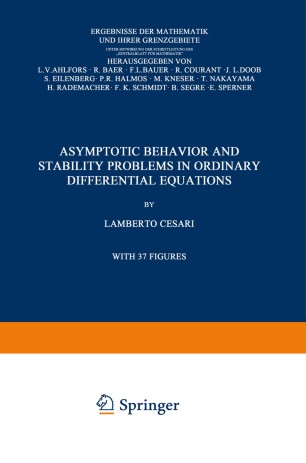 In the last few decades the theory of ordinary differential equations has grown rapidly under the action of forces which have been working both from within and without: from within, as a development and deepen­ ing of the concepts and of the topological and analytical methods brought about by LYAPUNOV, POINCARE, BENDIXSON, and a few others at the turn of the century; from without, in the wake of the technological development, particularly in communications, servomechanisms, auto­ matic controls, and electronics. The early research of the authors just mentioned lay in challenging problems of astronomy, but the line of thought thus produced found the most impressive applications in the new fields. The body of research now accumulated is overwhelming, and many books and reports have appeared on one or another of the multiple aspects of the new line of research which some authors call "qualitative theory of differential equations". The purpose of the present volume is to present many of the view­ points and questions in a readable short report for which completeness is not claimed. The bibliographical notes in each section are intended to be a guide to more detailed expositions and to the original papers. Some traditional topics such as the Sturm comparison theory have been omitted. Also excluded were all those papers, dealing with special differential equations motivated by and intended for the applications.