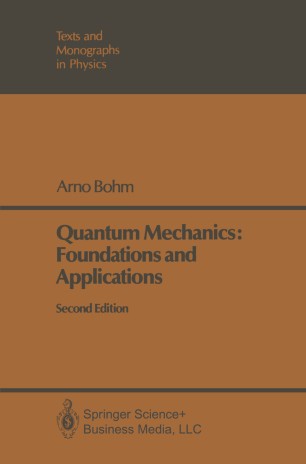 The first edition of this book was written as a text and has been used many times in a one-year graduate quantum mechanics course. One of the reviewers has made me aware that the book can also serve as, " . . . in principle, a handbook of nonrelativistic quantum mechanics. " In the second edition we have therefore added material to enhance its usefulness as a handbook. But it can still be used as a text if certain chapters and sections are ignored. We have also revised the original presentation, in many places at the suggestion of students or colleagues. As a consequence, the contents of the book now exceed the material that can be covered in a one-year quantum mechanics course on the graduate level. But one can easily select the material for a one-year course omitting-according to one's preference-one or several of the following sets of sections: {1. 7, XXI}, {X, XI} or just {XI}, {II. 7, XIII}, {XIV. 5, XV}, {XIX, XX}. Also the material of Sections 1. 5-1. 8 is not needed to start with the physics in Chapter II. Chapters XI, XIII, XIX, and XX are probably the easiest to dispense with and I was contemplating the deletion of some of them, but each chapter found enthusiastic supporters among the readers who advised against it. Chapter I-augmented with some applications from later chapters-can also be used as a separate introductory text on the mathematics of quantum mechanics.