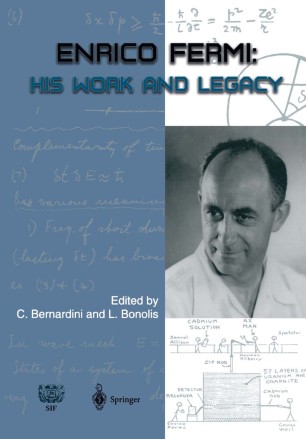 His Work and Legacy

Enrico Fermi’s scientific work, noted for its originality and breadth, has had lasting consequences throughout modern science. Written by close colleagues as well as scientists whose fields were profoundly influenced by Fermi, the papers collected here constitute a tribute to him and his scientific legacy. They were commissioned on the occasion of his 100th birthday by the Italian Physical Society and confirm that Fermi was a rare combination of theorist, experimentalist, teacher, and inspiring colleague. The book is organized into three parts: three biographical overviews by close colleagues, replete with personal insights; fourteen analyses of Fermi’s impact by specialists in their fields, spanning physics, chemistry, mathematics, and engineering; and a year-by-year chronology of Fermi’s scientific endeavors. Written for a general scientific audience, "Enrico Fermi: His Work and Legacy" offers a highly readable source on the life of one of the 20th century's most distinguished scientists and a must for everybody interested in the history of modern science.