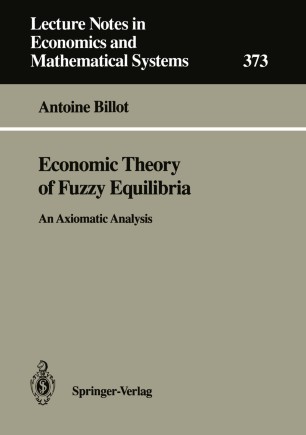 Fuzzy set theory, which started not much more than 20 years ago as a generalization of classical set theory, has in the meantime evolved into an area which scientifically, as well as from the point of view of applications, is recognized as a very valuable contribution to the existing knowledge. To an increasing degree, however, fuzzy set theory is also used in a descriptive, factual sense or as a decision making technology. Most of these applications of fuzzy set theory are in the areas of fuzzy control, multi-criteria analysis, descriptive decision theory and expert systems design. In economics, the application of fuzzy set theory is still very rare. Apart from Professor Ponsard and his group, who have obviously recognized the potential offuzzy set theory in economics much better than others, only very few economists are using this new tool in order to model economic systems in a more realistic way than often possible by traditional approaches, and to gain more insight into structural interdependences of economic systems. I consider it, therefore, particularly valuable that Dr. Billot, in his book, makes a remarkable contribution in this direction. There seems to be one major difference between Dr.