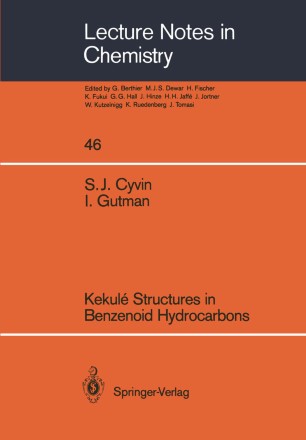 This text is an attempt to outline the basic facts concerning Kekul€ structures in benzenoid hydrocarbons: their history, applica­ tions and especially enumeration. We further pOint out the numerous and often quite remarkable connections between this topic and various parts of combinatorics and discrete mathematics. Our book is primarily aimed toward organic and theoretical chemists interested in the enume­ ration of Kekule structures of conjugated hydrocarbons as well as to scientists working in the field of mathematical and computational chemistry. The book may be of some relevance also to mathematicians wishing to learn about contemporary applications of combinatorics, graph theory and other branches of discrete mathematics. In 1985, when we decided to prepare these notes for publication, we expected to be able to give a complete account of all known combi­ natorial formulas for the number of Kekule structures of benzenoid hydrocarbons. This turned out to be a much more difficult task than we initially realized: only in 1986 some 60 new publications appeared dealing with the enumeration of Kekule structures in benzenoids and closely related topics. In any event, we believe that we have collec­ ted and systematized the essential part of the presently existing results. In addition to this we were delighted to see that the topics to·which we have been devoted in the last few years nowadays form a rapidly expanding branch of mathematical chemistry which attracts the attention of a large number of researchers (both chemists and mathematicians).