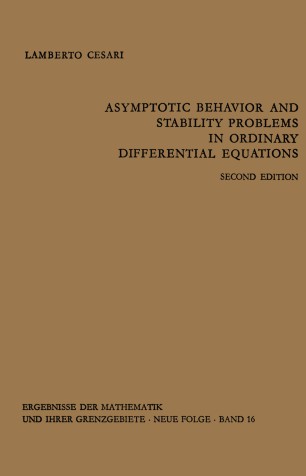 This second edition, which has become necessary within so short a time, presents no major changes. However new results in the line of work of the author and of J. K. HaIe have made it advisable to rewrite seetion (8.5). Also, some references to most recent work have been added. LAMBERTO CESARI University of Michigan June 1962 Ann Arbor Preface to the First Edition In the last few decades the theory of ordinary differential equations has grown rapidly under the action of forces which have been working both from within and without: from within, as a development and deepen­ ing of the concepts and of the topological and analytical methods brought about by LYAPUNOV, POINCARE, BENDIXSON, and a few others at the turn of the century; from without, in the wake of the technological development, particularly in communications, servomechanisms, auto­ matie controls, and electronics. The early research of the authors just mentioned lay in challenging problems of astronomy, but the line of thought thus produced found the most impressive applications in the new fields.