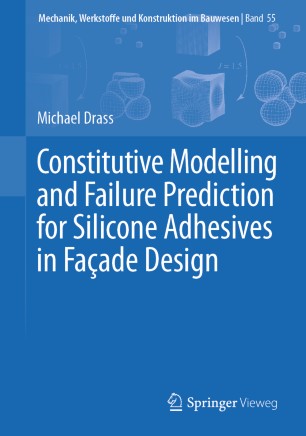 This book provides readers with an elementary understanding of the material behavior of structural silicones in façades. Based on extensive experimental investigations on a transparent structural silicone adhesive (TSSA), the material behavior, failure, and microscopic effects such as stress whitening, cavitation failure, and the Mullins effect are analyzed. In turn, novel hyperelastic material models are developed to account for nonlinear material behavior under arbitrary deformations. The development of a volumetric hyperelastic model makes it possible for the first time to approximate the structural behavior of TSSA under constrained tensile load and cavitation. The material models discussed here were implemented in a finite element code for validation, and their quality was confirmed by three-dimensional numerical simulations, in which an additional stretch-based failure criterion was evaluated for failure prediction. The numerical studies are in good agreement with the experimental results.

Michael Drass trained as a civil engineer and received his Master’s degree in Structural Engineering from the University of Applied Sciences in Mainz, Germany. He subsequently pursued his Ph.D. studies at the Technical University of Darmstadt’s Institute of Structural Mechanics and Design, where he focused on adhesive joints of all kinds in general glass constructions. This was also the subject of his dissertation on Constitutive Modelling and Failure Prediction of Silicone Adhesives in Façade Design. The author is currently working as a Post-Doc at the Technical University of Darmstadt. His work here is dedicated to identifying areas of application for artificial intelligence (AI) in civil engineering with a special focus on structural glass constructions. This topic is also the focus of the start-up founded by Michael Drass and Michael Kraus, M&M Network-Ing UG, which primarily develops and implements AI applications for companies.