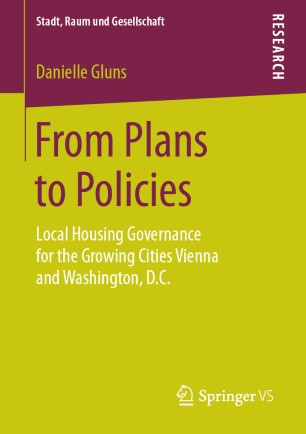 From Plans to Policies

Danielle Gluns examines how urban housing governance reacts to the onset of urban growth in an internationally comparative perspective. The study is based on in‐depth case studies of Washington, D.C., which is an example of primarily market‐based interactions, and Vienna, which has traditionally pursued an active steering role of the local state. The author assesses the goals of urban development formulated by local actors and analyzes their translation into housing policies within the respective governance structures. She demonstrates that path dependence is an important feature of urban housing governance, with relationships, ideologies, and physical urban structures leading to stability. Even so, change is possible, as both systems integrate new policy elements. At the same time, both structures perpetuate inequality in the urban housing system by excluding some of the most disadvantaged groups from decision‐making.
Contents
Target Groups
The Author
Danielle Gluns completed her doctoral degree at the Institute of Political Science at Westfälische Wilhelms-Universität, Münster.

Danielle Gluns completed her doctoral degree at the Institute of Political Science at Westfälische Wilhelms-Universität, Münster.