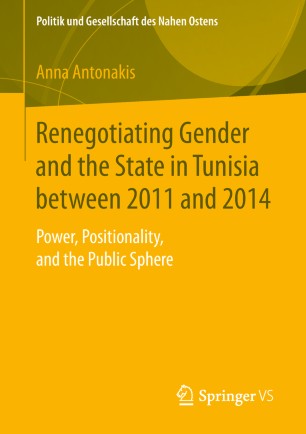 Renegotiating Gender and the State in Tunisia between 2011 and 2014

Power, Positionality, and the Public Sphere

Anna Antonakis’ analysis of the Tunisian transformation process (2011-2014) displays how negotiations of gender initiating new political orders do not only happen in legal and political institutions but also in media representations and on a daily basis in the family and public space. While conventionalized as a “model for the region”, this book outlines how the Tunisian transformation missed to address social inequalities and local marginalization as much as substantial challenges of a secular but conservative gender order inscribed in a Western hegemonic concept of modernity. She introduces the concept of “dissembled secularism” to explain major conflict lines in the public sphere and the exploitation of gender politics in a context of post-colonial dependencies.
Contents
Target Groups
The Author
Dr. Anna Antonakis is a researcher and consultant in the field of Gender, Media and Security. She investigated the Tunisian transformation process from 2013-2016 as a doctoral fellow at the SWP.