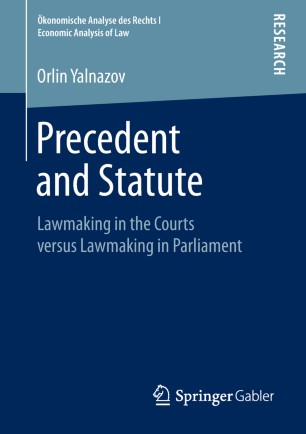 Should laws be made in courts or in parliaments? Orlin Yalnazov proposes a new approach to the problem. He conceptualizes law as an information product, and law-making as an exercise in production. Law-making has inputs and outputs, and technology is used to transform one into the other. Law may, depending on input and technology, take on different forms: it can be vague or it can be certain. The ‘technologies’ between which we may choose are precedent and statute. Differences between the two being sizeable, our choice has significant repercussions for the cost of the input and the form of the output. The author applies this framework to several problems, including the comparison between the common and the civil law, comparative civil procedure, and EU law. Perhaps most critically, he offers a critique of the ‘efficiency of the common law’ hypothesis.

Researchers, students, and practitioners in the fields of law, economics, and legal philosophy

Orlin Yalnazov was born in Varna. He holds a PhD in Law & Economics, awarded jointly by Erasmus Universiteit Rotterdam, Universität Hamburg, and Universitá di Bologna, as well as an LLM from the University of Cambridge and an LLB from Durham University. He works at the University of Hull.