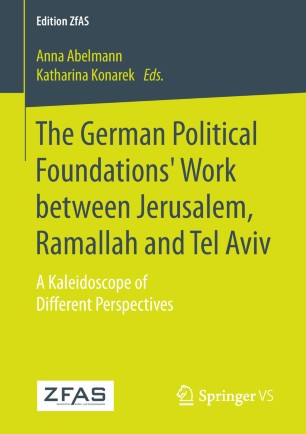 A Kaleidoscope of Different Perspectives

The German political foundations are a world-wide unique phenomenon. The concept of their international work as both independent organizations and state financed institutes are naturally raising several questions. This book focus on the foundations’ work in Jerusalem, Ramallah and Tel Aviv. This region holds a special position within the German foreign policy due to unique character of the German-Israeli relations and the ongoing Israel-Palestinian conflict. Israeli, Palestinian and German authors contribute to this publication by examining the history, potential influence, scope of action, chances and limits of the foundations in that region from different perspectives and with a specific focus on current developments

·        The German political foundations from an anthropological, political science and law perspectives

·        The German political foundations between Jerusalem, Ramallah and Tel Aviv: Reflections from within

“Remittance Income and Social Resilience among Migrant Households in Rural Bangladesh is a useful read for migration researchers, development practitioners, and students interested in development studies and livelihoods research. Overall, an engaging read, what adds depth to the analysis is the use of extensive quotes from migrants and family members left behind and the pictures that give readers, even those unfamiliar with the Bangladeshi or South Asian context, an opportunity to understand local conditions and everyday living.” (Chandni Singh, The Newsletter - International Institute for Asian Studies, iias.asia, Issue 82, 2019) ​
Buy options