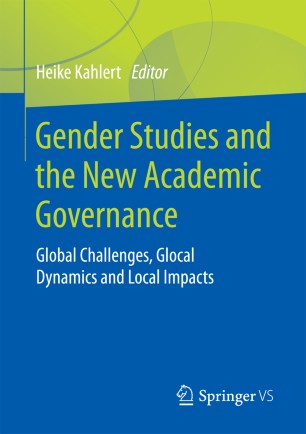 What is happening to gender studies and gender research as emerging but contested fields of scientific knowledge in the conditions of the new academic governance? And which role do gender studies and gender research play in the current transformations in academia? All articles in this book make clear that the impacts of the new academic governance have global, glocal and local dimensions which have to be taken into account in analysing the state of gender studies and gender research at the end of the 2010s. From diverse geopolitical and sociocultural views the authors simultaneously draw a multifaceted picture of the current situation, criticise the widespread tendencies of the marketisation of scientific knowledge, suggest strategies for resistance against the neo-liberalisation of higher education and research, and identify starting points for further and optionally comparative studies on these issues. These contributions emphasise not only the need for more theoretical reflection and empirical research and for critical exchanges on the current transformations, but also the need for political action to challenge, resist and change them.
Contents
Interventions: Gender, Gender Studies and Academic Feminism • Interactions: Gender Research, Academic Feminism and Society • Institutionalisations: Gender Studies´ Epistemic and Organisational Statuses in the Academy
The Editor
Dr Heike Kahlert is Professor and Chair of Sociology/Social Inequality and Gender at the Ruhr-Universität Bochum (RUB), Germany.