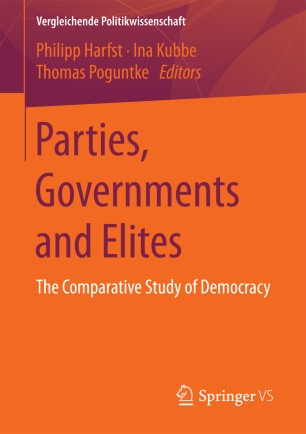 The Comparative Study of Democracy

Parties, governments and elites are at the core of the study of democracy. The traditional view is that parties as collective actors play a paramount role in the democratic process. However, this classical perspective has been challenged by political actors, observers of modern democracy as well as political scientists. Modern political parties assume different roles, contemporary leaders can more heavily influence politics, governments face new constraints and new collective bodies continue to form, propose new ways of participation and policy making, and attract citizens and activists. In the light of these observations, the comparative study of democracy faces a number of important and still largely unsolved questions that the present volume will address.

- Practitioners of democracy promotion and stabilisation

Dr. Philipp Harfst is Assistant Professor of Political Science at the University of Oldenburg, Germany.

Dr. Thomas Poguntke is Professor of Comparative Politics and Director of the Düsseldorf Party Research Institute (PRuF) at the University of Düsseldorf, Germany.

Dr. Philipp Harfst is Senior Scientist at the University of Salzburg, Austria.

Dr. Thomas Poguntke is Professor of Comparative Politics and Director of the Düsseldorf Party Research Institute (PRuF) at the University of Düsseldorf, Germany.