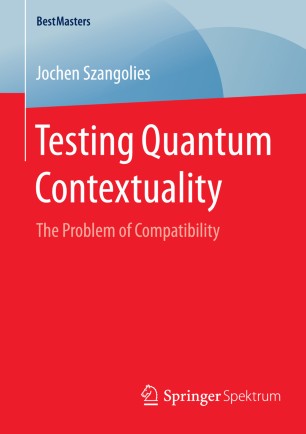 The Problem of Compatibility

Jochen Szangolies contributes a novel way of dealing with the problem of the experimental testability of the Kochen-Specker theorem posed by realistic, that is, noisy, measurements. Such noise spoils perfect compatibility between successive measurements, which however is a necessary requirement to test the notion of contextuality in usual approaches. To overcome this difficulty, a new, extended notion of contextuality that reduces to Kochen-Specker contextuality in the limit of perfect measurement implementations is proposed by the author, together with a scheme to test this notion experimentally. Furthermore, the behaviour of these tests under realistic noise conditions is investigated.

Jochen Szangolies obtained his diploma in physics at the University of Siegen, studying the problem of the experimental verification of quantum contextuality under Prof. Otfried Gühne. Currently, he investigates methods of entanglement detection under the tutelage of Prof. Dagmar Bruß at the Heinrich-Heine University Düsseldorf.