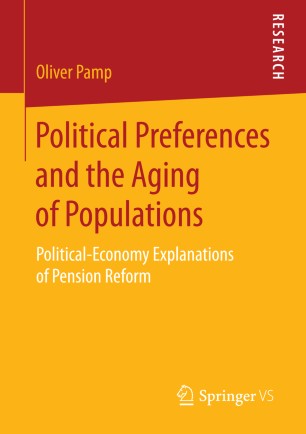 Political Preferences and the Aging of Populations

Oliver Pamp analyzes the likelihood and extent of pension reforms from a political-economy perspective. It is shown that voters’ preferences for or against reforms are influenced by a societies’ demographic development, the generosity of its existing public pension scheme and its electoral system. The author extensively reviews existing formal models of pension systems, discusses their merits and limitations, and develops a three-period overlapping generations model. The model’s insights regarding individual reform preferences are then put into the context of different electoral systems, thus emphasizing the important role of electoral institutions in the aggregation of societal preferences. Finally, using cross-national survey data, logit and ordered-logit analyses tentatively confirm some of the model’s main implications.

Oliver Pamp is lecturer for empirical and formal methods at the Geschwister Scholl Institute of Political Science at the Ludwig Maximilians University in Munich (Germany). His research focuses, among other things, on the political economy of government budgets and social policy.