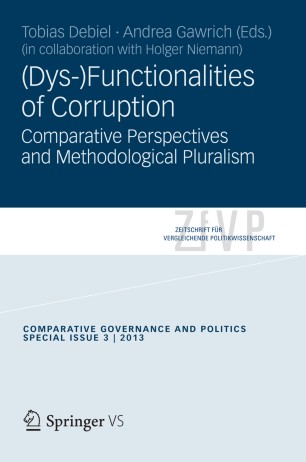 Corruption is usually understood as hampering political development, economic growth and democratic participation of citizens, but comparing the effects of corruption for different political regimes presents astonishingly complex findings. The ongoing persistence of corruption underlines that it is not only dysfunctional, but can be highly functional as well. This special issue brings together contributions from comparative politics, political science and economics which precisely focus on these (dys)functionalities of corruption in political regimes across various world regions. The question of methodological pluralism is especially important for studying corruption comparatively. While on an international level a trend towards an increased use of quantitative methods in political science as well as in economics can be observed, the special issue underlines the importance of having a pluralistic approach for grasping the complex and multi-layered effects of the phenomenon. Of similar importance is the adoption of a comparative perspective that includes different world regions in order to understand the different roles of corruption in developing, transforming and developed countries alike.

Dr. Tobias Debiel is Director of the Centre for Global Cooperation Research and of the Institute for Development and Peace (INEF). Since 2006, he is also Professor in International Relations and Development Policy, Institute of Political Science, University of Duisburg-Essen.

Dr. Andrea Gawrich is Professor for International Integration at the University of Gießen.