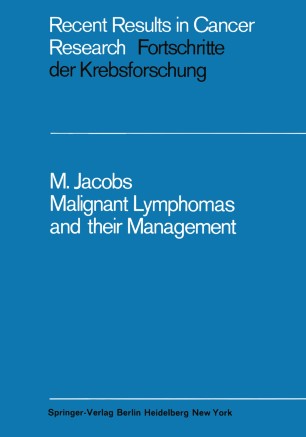 Malignant Lymphomas and their Management

Over the years, the management of lymphomatous disease has followed a general trend from the purely empirical and intuitive use of medications to radiation, to surgery, and to chemotherapy with alkylating agents and anti-metabolites. In the 20th century, the treatment of these diseases has been predominantly by radiation. As radiology emerged from ROENTGEN'S original work to the sophisticated science of the present, the radiological equipment, which had been crude and inaccurate, evolved into mechanical and electronic instruments of enormous complexity and capable of great accuracy. The progress and success of radiation therapy for malig­ nant disease paralleled the technical development of the devices employed. For this reason, the chronology of the parallel development is given in detail. The gross and histologic descriptions of the lymphomas, from 1832 to the present, are voluminous and controversial. Therefore the pathology is reviewed and these diseases classified before reviewing therapy of the lymphomas. I. Hodgkin's Disease 1. Pathology and Classification The current classification of the so-called lymphomata into HODGKIN'S disease, lymphosarcoma, and reticulum cell sarcoma is modern. Any historical or scientific review of ,the subject rightfully begins with a discussion of HODGKIN'S original paper entitled "On Some Morbid Appearances of the Absorbent Glands and Spleen" published in 1832. This classical report describes the clinical and gross pathologic findings in a group of patients whose symptomatology presented striking similarities; notably enlargement of peripheral lymph nodes in the neck, the axillae, and the groin and, frequently, enlargement of the mediastinal nodes.