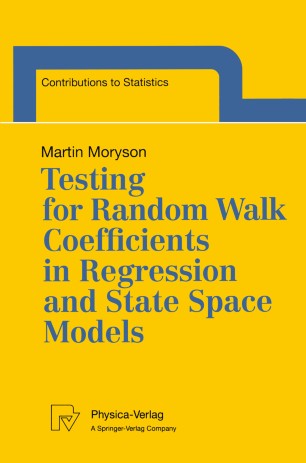 Part of the Contributions to Statistics book series (CONTRIB.STAT.)

Regression and state space models with time varying coefficients are treated in a thorough manner. State space models are introduced as a means to model time varying regression coefficients. The Kalman filter and smoother recursions are explained in an easy to understand fashion. The main part of the book deals with testing the null hypothesis of constant regression coefficients against the alternative that they follow a random walk. Different exact and large sample tests are presented and extensively compared based on Monte Carlo studies, so that the reader is guided in the question which test to choose in a particular situation. Moreover, different new tests are proposed which are suitable in situations with autocorrelated or heteroskedastic errors. Additionally, methods are developed to test for the constancy of regression coefficients in situations where one knows already that some coefficients follow a random walk, thereby one is enabled to find out which of the coefficients varies over time.