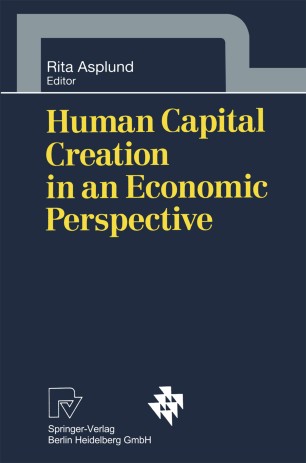 The past few decades have seen a revolutionary increase in interest in the economic role of education and training at the societal, business, and individual levels. This is mainly due to the strong post-war growth in industrialized economies, which has been driven by rapid technological progress and far-reaching structural change and, in the end, has resulted in increasingly skill-intensive production and growing demandfor more educated labour. Today it is frequently argued that with the increasing importance of the role of know-how, the workforce has become the most important single input in the production process. Simultaneously the dramatic increase in the availability of large micro-Ievel databases has opened enormous possibilities to study the economic role of human capital creation also empirically. The economic perspective of human capital accumulation is, however, of utmost importance also in times of deep economic recession. Periods of economic slowdown and rapidly increasing unemployment tend to in crease the demandfor advanced education and training in particular. This brings up, in turn, questions regarding overeducation and satisfying both private and social retums on investments in human capital.