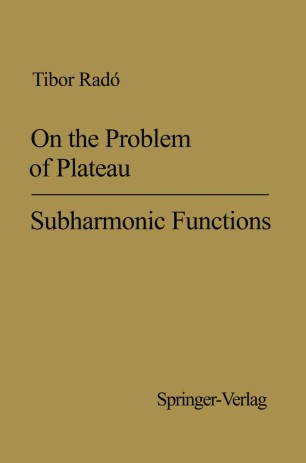 On the Problem of Plateau

The most immediate one-dimensional variation problem is certainly the problem of determining an arc of curve, bounded by two given and having a smallest possible length. The problem of deter­ points mining and investigating a surface with given boundary and with a smallest possible area might then be considered as the most immediate two-dimensional variation problem. The classical work, concerned with the latter problem, is summed up in a beautiful and enthusiastic manner in DARBOUX'S Theorie generale des surfaces, vol. I, and in the first volume of the collected papers of H. A. SCHWARZ. The purpose of the present report is to give a picture of the progress achieved in this problem during the period beginning with the Thesis of LEBESGUE (1902). Our problem has always been considered as the outstanding example for the application of Analysis and Geometry to each other, and the recent work in the problem will certainly strengthen this opinion. It seems, in particular, that this recent work will be a source of inspiration to the Analyst interested in Calculus of Variations and to the Geometer interested in the theory of the area and in the theory of the conformal maps of general surfaces. These aspects of the subject will be especially emphasized in this report. The report consists of six Chapters. The first three Chapters are important tools or concerned with investigations which yielded either important ideas for the proofs of the existence theorems reviewed in the last three Chapters.