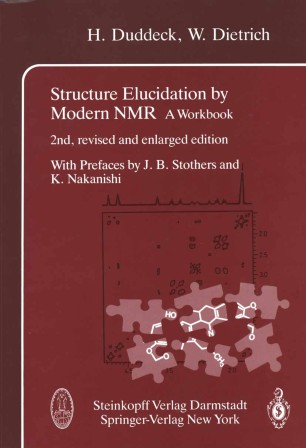 For several years, we have been organizing seminars and workshops on the application of modem one­ and two-dimensional NMR methods at the faculty of chemistry in the Ruhr-University Bochum, FRG, and elsewhere, addressing researchers and graduate students who work in the field of organic and natural products chemistry. In 1987, we wrote a workbook (StrukturaufkUirung mit modemer NMR-Spektroskopie, Steinkopff, Darmstadt, FRG, 1988) in German language based on our experience in these courses. Many of the exercises described therein have been used in such courses and some of them have been shaped by the participants to a great extent. The response of readers and discussions with colleagues from many countries encouraged us two years later to produce an English translation in order to make the book accessible to a wider audience. Moreover, the content has been increased from 20 exercise examples in the German, to 23 in English version. Now, after the rapid development of basic multipulse NMR me­ thods in the early 1980s, the avantgarde in modem NMR is concentrating on the invention and optimi­ zation of advanced techniques, e. g. , three-dimensional experiments. For the beginners, however, the situation has not changed markedly since the appearence of the first edition of this book. Therefore, we decided not to add new techniques to this second edition, but rather to increase the number of exerci­ ses from 23 to 33, the new ones being basically single-spectrum-problems.